Have you watched the movie 'Independence day'? 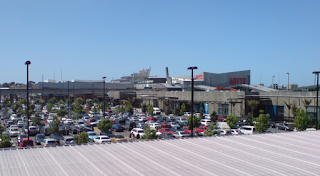 On Saturday 26th of June, We went to the movie at Sylvia park.

Early in the morning I woke up and the time was 7:18. I checked to see it my brother was still sleeping in bed but he wasn't there. He was already in the living room watching movies with my dad.

When the movie had finished, I went to the kitchen to list what we needed from the refrigerator and the cupboard. After that I went around the house to check what we needed.

I went to the living room to wake up my mum and then she said to my brother and I, "Go and get ready because when I'm done we are going to pick Lei up".

When we got there we stayed at my cousin's house until 11:00. I was playing rugby with my cousin and my brother upstairs. I had a great try because my brother came to tackle me but I jumped over him and scored a try. It was a high jump and I nearly landed on my head but I landed on my back and it was a painful landing.

After playing rugby with my cousin and brother I went down stairs to check to see if we were going to the movies. My mum said, "We can go now!" I called out to my cousin and my brother to come and wear their shoes.

My mum said that she is not coming to the movies with us. First we went to go and some food from Mcdonalds and some butter chicken. We all got two burgers each. However I had too much butter chicken so I only had a burger.

Soon we went to the movies and first we went to the game area to play some games. The game that I played was called key locker. The game has a key and the challenge is to put the key through the keyhole.

Before long, we went into the theatre to watch an alien movie. It was a bit scary because it had giant alien that was destroying the moon and the earth core for fuel for the aliens ship.

My favourite part was when I jumped over my cousin to score a try.

Learning intention: We are learning to understand and use the language feature of a recount.
Success criteria: I know I can do this when I group the events  from my weekend in order.
Posted by Unknown at 2:09 pm

Email ThisBlogThis!Share to TwitterShare to FacebookShare to Pinterest
Labels: Christian

Want to have some fun today? Clear some space and turn up the volume, Brett is ready to JUMP JAM with you from his home in Mt Maunganui. More tracks will be added to this page so bookmark it, or keep on checking for more workouts and fun with Brett.